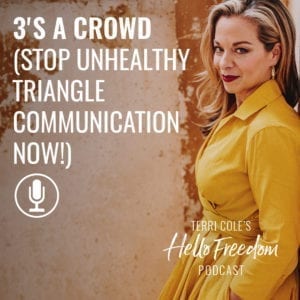 Today I’m talking about triangulation! What is triangulation you ask? This crazy kind of communication is when you have a problem with person A, but you talk about it to person B, and expect person B to go to talk to person A! It’s confusing, I know.

If you want to up your communication game, have healthier relationships, it’s time to cut triangulation out of your life! Listen to today’s episode to learn more about triangulation, what environments it’s common in, and what you can do to stop it.

“A lot of times we tell another person because we want it to get back to the original person, but we just don’t have the courage to say it directly to their face.” – Terri Cole

“Passive aggressive behavior doesn’t work, it’s unhealthy, and it keeps you stuck in a cycle of behavior that doesn’t give you the satisfaction you want.” – Terri Cole