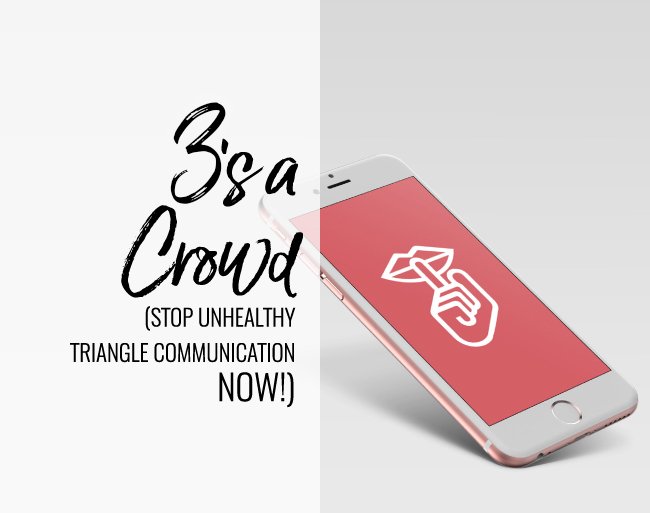 Have you ever had an experience where something has happened with one person, and that person goes to another friend to complain about you? Or have you ever had a work experience where your boss comes to you and says that a colleague complained about you and you’re left wondering why the colleague didn’t come to you directly? If you answered yes to any of those situations – or maybe you’re the person who is doing this indirect communicating…what you’re doing is called triangulating.

Today we’re going to be talking about “triangulation”, which is basically the unhealthy back channel, potentially toxic communication that happens in many relationships. Why is it called triangulation? It makes sense because it looks like a triangle. You have an incident with Betty and then Betty goes to your other friend over here. So that means that a third party or an outside party gets involved.

So let’s talk about the impact of triangulation, what it really is and why you don’t want to participate in it:

Triangulation is a passive aggressive, unhealthy way of communicating. It is unhealthy not only because it is indirect but also because it involves another person – who is not actually involved.

Think about your life and be honest with yourself – do you do this?  If you do – don’t be ashamed or embarrassed – we all do it a little.  BUT, if you do it a lot, it’s really not cool, and it’s unhealthy – not just for other people but for you – and it can be toxic to your relationships.

This way of communicating is not a good problem-solving method. The truth is, it usually exacerbates problems. Think about your own life, your family system, and the family that you grew up in. If you’re grown and you have children of your own, is there triangulation within those systems as well? When you have a problem with someone, is your first instinct to talk to them about it or talk to someone else about them?

If you have had a painful experience with someone and you want to talk to a close friend or a mentor about that experience, that is a different scenario and can be part of coming to a resolution. I’m talking about going to a third party to talk badly about another person. That’s triangulation because it involves this other person and often we tell another person because we want it to get back to the person we originally had the problem with – we often just don’t have the courage to say it directly to them.

Let’s talk about your choices. What are the choices that you have when you are presented with this situation?

Let’s assume that you’re on the receiving end of the situation and someone comes to you to talk badly about someone else.

You have three choices:

So someone comes to you and says that a third person has a problem with you. If you get direct, you have to choose to say to the messenger (because that’s really what the third person is) “I really appreciate you coming to me, but I’m going to go talk to <original person> directly.”

Of course, the messenger may not WANT you to – as the original person told them ‘not to say anything’. If that is the case, you can say “Okay, but can I make a simple request that going forward, if someone comes to you with a complaint about me, that you please ask them to come directly to me? Would you please decline to be the middleman?” This is an effective way to stop future triangle involvement.

When someone is trying to triangulate you, they are trying to express their displeasure about something that doesn’t involve you. If someone complains to you about someone else, you can draw a boundary and be compassionate by simply saying “I hear you but I think it would be more productive if you went directly to <third person> with how you’re feeling.” Once again, consciously removing yourself from the triangle.

Indirect communication does not help solve the actual problem. If you find that you are afraid to draw boundaries and/or afraid to speak honestly, then you need my Boundary Bootcamp and while that program isn’t going to be around for another couple of months, you can start by reminding yourself now that life is too short for this kind of confusing communication that becomes a block to satisfaction in relationships.

Of course, the third choice that you have when you’re in this situation especially if it’s someone who is perhaps a subordinate to you at work or works for you is that you can guide them by coaching them with what would be a more productive response. You might say, “I would really appreciate you going directly to <third person> about this because I think that you guys getting a problem-solving dialogue going would be really helpful. If it’s something where you need me to step in, I will. But right now, you’re basically just complaining about something that you could go directly to them about, and it will really build your work relationship with them.”

It takes courage to have the hard conversation, but it’s always worth having.

The reason that I don’t want you using passive-aggressive behavior at work or at home in your family of origin (and your chosen family with your friends) is because not only does it NOT WORK and is unhealthy, but it keeps you stuck in a circular way of behaving that does not give you the satisfaction that you desire.

Indirect communication also damages trust. Do you know why? Because going behind someone’s back to talk about them makes you untrustworthy. One of the most empowering experiences is becoming someone that people know is REAL. When you say something, they know you mean it because you speak your truth and keep your word (and if you have something to say, you say it to their face.)

Don’t judge yourself for triangulation – I’m certainly not. I was a massive triangulator in my past.  Before I really spent time working on myself and becoming aware of my behaviors and my choices. Be kind to yourself and make the choices that are healthy for you.

“I did then what I knew how to do. Now that I know better, I do better.” Maya Angelou

If you liked this video, if it added value for you, please share it on all your social media channels. Send it to friends or family members who you think it might help because you know my heart’s desire is to help as many people as possible to live their happiest lives. And as always, take care of you!