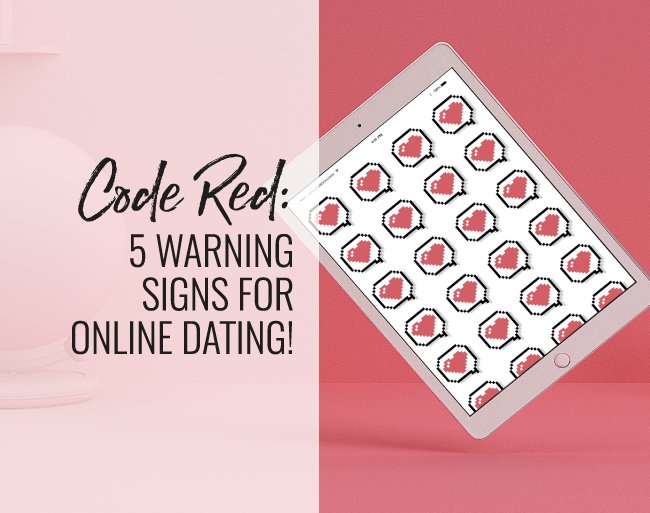 In this week’s Real Love Revolution video, we’re going to be breaking down the top five high-alert warning signals that you should not ignore if you are dating online or using dating apps. Many people have asked me to talk about how to protect themselves in the online dating world, so in this video, we are going to look at how can you stop wasting your precious life and time with people who aren’t who they say they are or who aren’t serious about being in a relationship. Sometimes our own experiences make it difficult for us to recognize unhealthy behavior or warning signs, so I hope this list acts as a guide to help you protect yourself and help you stop wasting your valuable time!

If someone’s profile is super scarce and there’s not a lot of information – it doesn’t have to mean that they’re not who they say they are but it does indicate that maybe they are not willing to put in the time, energy, and effort to make a meaningful profile so that you could get to know them at least a little bit.  This is especially something to look out for if it continues to other forms of communication. When talking or texting, or even when meeting, if they are sketchy or secretive about their life, where they’re from, their family, what they do for a living – this is a definite warning sign. Of course, I’m not talking about people who are just shy. It’s normal to be a little reserved when just getting to know someone, but when someone is secretive or never gives you any real information about themselves…that raises a red flag.

If you are dating someone and you ask them a normal question and you feel they are being evasive, it’s worth noting and communicating that you would like to get to know them better. Some people may just be painfully shy, but if it is not just shyness, you will see a pattern of avoidance in the communication – and do you really want to be in a relationship with someone who is hard to get to know or secretive?

The second warning sign is someone who is getting sexy with you over text – wanting to talk dirty or engage in virtual sex.

I’ve seen this in my practice often, and it can very flattering in the beginning when someone texts you to tell you they are thinking about you etc, but it often quickly escalates into someone wanting to have virtual verbal sex with you when they haven’t even met you. That is a huge red flag.  Maybe I’m just old and uptight (Although I don’t think so :o) ) but I really see that as a major issue. If you haven’t even met someone and they’re telling you how much they desire you, and what they want to do with you, this is a sure indication of someone who just wants to get laid and is not really in the market for a long-term relationship. Don’t be blinded by the fact that it flatters you – really think about whether this behaviour is ok with you. If you were on a date with someone and you were sitting there having a drink and they reached over and grabbed your breasts, would that be ok? No – that is a boundary that is being inappropriately crossed.

The third early warning sign to look for is if the person’s words and their actions are not aligned. For example, if they say they will call at an agreed day or time and then call a day or two late, acting as if they never agreed to call you earlier. Wanting someone to stick to their word is not nagging or being demanding. This kind of behavior is one of the first indicators that maybe this is someone who cannot be trusted. So if you really like this person, it is worth being honest and just letting them know that rather than trying to be too accommodating and setting agreed times that they cannot stick to, you would rather they do what they say they are going to do as this is the only way to build trust.

If they react badly to an open and honest request, then that in itself tells you what kind of person they are. People who keep their word do it no matter what. And if they can’t, they let you know or give an explanation – rather than just pretending it didn’t happen. It’s not about everything having to be perfect – it’s about actions and words being misaligned. You deserve someone that you can count on.

Another warning sign to look out for is if they are endlessly bad mouthing their ex. If you are on your first or second date and they are constantly talking about or blaming their ex (or ex’s), this indicates to me that something is unresolved about their last relationship. As you get to know someone, you will obviously share histories and more about your past, but the warning sign I am referring to is when they keep talking in a blaming way about a past relationship early on in the dating process.

People who have unresolved issues about past relationships are generally not ready to be in a relationship. Not if they are pining over or feeling super bitterness about their ex.

If you are constantly getting calls or texts late at night asking you what you are up to, or if you want to come over, that is someone who is not putting an effort into actually making a date. We all know what ‘Netflix and Chill’ means – and you don’t want that.

A first date should not be in anyone’s house or apartment. First of all (especially in New York City) it is not safe to go to the house of someone you don’t know. Also, when you meet with people in the beginning stages of dating, YOU need to dictate where it’s going to be. And then if you like each other, you can go on to lunch or dinner. This expectation of instant intimacy, that Netflix and chilling is a ‘good enough’ first date, tells you that either they don’t value themselves enough to even know how to create a proper date…or that really they just want sex. So please, value yourself more than that. You don’t owe someone sex on the first date. I had an ‘eight date’ rule, but that’s just my way of doing things and you will decide what makes sense for you. Whatever you decide to do –  do it because you want to, not because you think that the other person expects it.

I hope that you find these early warning signs helpful because you really deserve to be in a loving relationship that makes you feel valued and important. And the truth is, being aware of these warning signs will prevent you from wasting your precious time in your beautiful one-of-a-kind life. Nobody’s got time for that.

If you liked this Real Love Revolution video, please share it on your social media outlets and with your friends or with anyone who you think might benefit from this information.

I am super, super excited that this week we have our masterclasses. Ladies, there is still time to join us, whether you’re single or in a relationship because I’m doing two separate masterclasses for the end of the Raise Your Love Vibe Challenge. Whether you did the challenge or not doesn’t matter – all you need to do is sign up by CLICKING HERE and I will teach you more about how to either attract your soulmate or uplevel the relationship you’re in (or perhaps get out of their relationship you’re in… depending on what your situation is.)

Have an amazing week and as always, take care of you.