You are here: Home / The Terri Cole Show / 44 We Are The XX – Amplifying the Female Voice

We all love stories.

They are the narrative glue that binds a tribe, family or society together.

Shared experiences, memories or history give us a feeling of belonging and security.

The sense of being a part of something bigger than ourselves draws us together.

To intimately understand a generation, or a movement, you have to listen to the stories of the people at the forefront, the change-makers. Storytelling, in all forms of media, is an important part of shaping history and moving society toward equality.

“We all live in that world of images and stories, and most of us are damaged by some version of it, and if we’re lucky, find others or make better ones that embrace and bless us.” – Rebecca Solnit

People crave stories and conversations that reflect true life. For much for history, one version of the truth has been told many times. There is power in storytelling, and because of the patriarchy, and the fact that men have held power in society for so long, we have only heard their part of the story. But as a new generation of women rises up, as our societal structure shifts and transforms, so too does the storytelling. Power shifts when the voices of women are heard. Women telling their own stories and the true stories of their sisters gives them agency and opportunity to own their power. We want the pieces that have been missing for so long – the stories of women around the world; and not just the stories of oppression, but those of badass Sheroes making brave strides toward equality all over the globe.

Your Story Matters but YOU Must Be the One to Tell It! @Terri_Cole #StepUp #SpeakUp {CLICK TO TWEET}

So if you want to know what feminism is like for today’s generation of women, listen to their stories. That is exactly the mission (and the Feminist Manifesto) of my guests on this week’s episode of Hello Freedom, Kassidy Brown and Allison Rapson, who own a company together called We Are The XX. 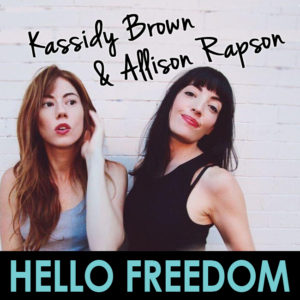 They started this company because they wanted to hear their generation’s values reflected in feminism, and to see themselves represented in the media through storytelling. The company amplifies the voices of women in media and aims to change the way women are represented. They’ve got a series, which you can watch on Refinery29, that documents feminism around the world, and it is incredibly powerful.

I think you’re really going to enjoy this empowering conversation with two women who are walking the talk and working to change the face of feminism for their generation.

“Our philosophy is that there are plenty of seats at the table, and there’s room for everyone to have a voice in it.” – Allison Rapson

“In the female space we do have a social responsibility to make sure that we share our abundance, we break down the scarcity model, and make space for each other.” –  Allison Rapson

“We’re not trying to figure out the best way to thrive in patriarchy, we want to create a new system that benefits both men and women.” –  Kassidy Brown