Do you worry about aging?

In our youth obsessed society continuing to feel good about yourself as you age is an inside job.

If we leave it to the media to tell us how we should look at what age, we’re doomed. We’re bombarded all day with messages that YOUTH + BEAUTY = VALUE.

Ageism and sexism are evident in all industries but it’s most visible to the naked eye, in entertainment. Historically, leading men become distinguished and debonair as they age and their leading ladies get replaced with younger women. This is not new. From Woody Allen romancing Mariel Hemingway in the film Manhattan (1972, He was 42, she was 17) to Tom  Cruise starring opposite Emily Blunt in Edge of Tomorrow (2014 He was 52, she was 32) to Olivia Wilde not being cast as Leonardo DiCaprio’s love interest in Wolf of Wall Street because she was “too old” (2013, He was 38, she was 28). Eventually the role went to Margot Robbie (who was 22).

So what are we doing about it?

In entertainment, the news isn’t all bad. The increase in quality networks creating original programming like HBO, Netflix, Amazon, Showtime, FX, AMC etc is also creating better and more opportunities for women to be cast in leading, relevant roles. It used to be considered a step down to go from films to television but that perception is changing.  One show that is a perfect example of this change is Jessica Jones, created for Netflix by showrunner, Melissa Rosenberg. It is Marvel Comic’s first ever show or series featuring a female superhero. This show is breaking barriers, crushing the Bechdel test and super binge-worthy to boot! (I say that from personal experience. I binge watched season one in a weekend when I had the flu and did a happy dance when I got a text from my niece telling me season two had been picked up!) 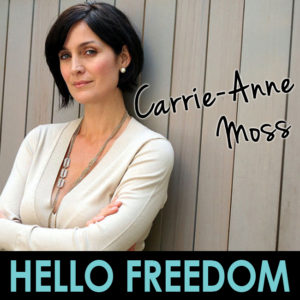 So, this all brings me to today’s Hello Freedom guest interview with the wonderful Carrie-Anne Moss, who plays one of the lead characters, badass lawyer with somewhat questionable moral standards, Jeri Hogarth in the Jessica Jones series. Carrie-Anne is not only a masterful actress with formidable career spanning 24 years but she is also the founder of an online community, Annapurna Living. Carrie-Anne has created a safe space for women to learn, support, share and rejoice together. There are tips and strategies on how to simplify and be present in our lives. Carrie-Anne leads deep discussions that address our biggest challenges and provides an opportunity to be a part of a divine women’s circle.

Listen in to today’s episode as we talk about aging, parenting, self care, and more.

“It has the potential to be brutal. If you don’t have a really strong connection to yourself, and if you don’t know who you are and if you don’t value yourself, getting older sucks. I happen to be in a business where a big part of it is how you look. That has its pros and cons. I am choosing to get to know myself so that I can navigate this terrain as gracefully as possible. …Hollywood is never going to take care of me. I will never look to it to take care of me. I realized that very early on and it’s been probably one of the reasons why I’ve been able to be so healthy inside of it because it will love you and you’ll be on a number one show and then you won’t be. And you’ll be in a huge movie and then you won’t be. People will send you gifts and then they’ll stop. And if you can’t care about, if that is valuable to you and the value is outside of you, you will just be put through the ringer.”

“It became about how do you nourish yourself while you are living a modern life?” – Carrie-Anne Moss

“I wanted to be that space for women who don’t have any exposure to this way of thinking.” – Carrie-Anne Moss

“I want to elevate the energy on any set that I’m on.” – Carrie-Anne Moss

“I’m choosing to get to know myself better so that I can navigate this terrain as gracefully as possible.” – Carrie-Anne Moss

42 Arielle Haspel – Being and Eating Well
Next Post: 44 We Are The XX – Amplifying the Female Voice