You are here: Home / Health / 36 Recognize Signs of Alcoholism: Two Stories of Addiction with Special Guest Andrea Owens (& Me!)

For a long time after it was over, I referred to it as, those two long weeks in ’08. And while I was in the middle of it I referred to what I was doing as, a social experiment.

It was more significant than two weeks might imply and it had nothing at all to do with any social experiment.

I had long ago accepted my status as an alcoholic. In fact, I stopped drinking for good, during the last three months of my senior year of college. As the years went by though, I often wondered if I was REALLY an alcoholic. Maybe it would be different now, maybe I could drink like a normal person after twenty-two years without a drop.

I got my answer during those two weeks in 2008, which was a resounding HELL NO! I could not drink moderately and I knew that if I did not stop as abruptly as I started, I would lose everything.

I waited eight years to share this experience publically because the mental obsession that the relapse triggered was so terrifying. Every time I thought about telling this tale in hopes that it might help someone else in pain, it felt too soon, until now.

Speaking of helping, if you think you or someone you love may have a problem with alcohol below are 20 questions that Alcoholics Anonymous suggests will help to gain clarity.

According to AA, if you answer affirmatively to even one question, you may have a problem with alcohol. According to me:

I chose to interview a new pal, Andrea Owen as a part of this week’s podcast on addiction because she has her own recovery story that inspired me to share mine. We met last summer when w 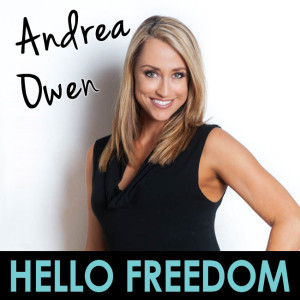 e were both facilitators at Soul Camp East, and immediately connected. Andrea is an author and certified life coach. She helps women get what they want by letting go of perfectionism, control, and isolation, and instead teaches them to choose courage. She has also written a book that I love, 52 Ways to Live a Kickass Life.

To hear Andrea’s inspiring journey through addiction in addition to the full account of my 2008 relapse saga, tune into today’s episode of Hello Freedom.

If you know you have a problem with any addiction, I pray that this podcast will inspire you to get help. You are not alone.

“The feelings are rich and scary and the joy that I feel? Now I know what tears of joy are. ” – Andrea Owen {CLICK TO TWEET}