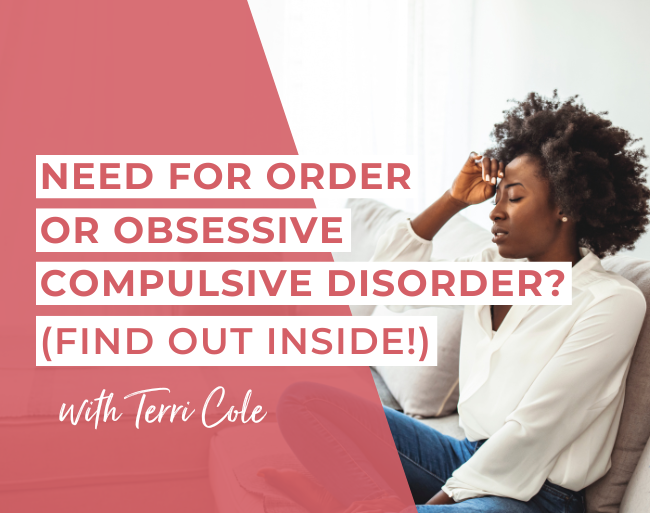 Need for Order or Obsessive Compulsive Disorder? (Find Out Inside!)

Have you ever described yourself or someone else as having OCD?

I recently had someone write to me about their “neat freak” partner, referring to them as having OCD, and I was like…hold up. Not everyone who likes things orderly has obsessive-compulsive disorder, yet it’s a term that gets thrown around lightly.

It is much more complicated than excessive hand washing or checking that the stove is actually off.

In this episode, I’m covering the differences between obsessive-compulsive disorder and a need for order and cleanliness. Plus, what it is, the way that it can present, and the real struggles that people with OCD face.

Remember, learning how to talk about mental health with sensitivity and compassion starts with getting informed so let’s go!

From Marie Kondo to the huge success of shows like The Home Edit, not to mention the extra hand-washing, masking, and disinfection safety protocols that came with the pandemic, OCD has come to the forefront of our cultural lexicon. But the popular use of this term is not always accurate.

As a mental health advocate and expert, I think it’s important to make a distinction between having a serious diagnosable disorder and having a thing for being neat and orderly.

Let’s get clarity around the definition: “Obsessive-compulsive disorder (OCD) is a disorder in which people have recurring, unwanted thoughts, ideas or sensations (obsessions) that make them feel driven to do something repetitively (compulsions).”

Statistics say 1 in every 40 adults and 1 in every 100 children live with OCD. We all have intrusive thoughts once in a while like if we’re in a fight with someone, need to have a hard conversation, or if we’re stressed out, but for most of us, our ruminations have a logical reason and origin.

There has been a misrepresentation in the media and culture that those with OCD are extremely and particularly clean. While that can be true, it isn’t always true. Many people with OCD experience intrusive thoughts and compulsive behaviors that have nothing to do with cleanliness. On the flip side, many people have a preference for neatness, extreme order, and cleanliness that has nothing to do with OCD.

It is important to understand this disorder presents many different masks, and it goes far beyond the commonly associated behaviors of handwashing or checking to see if something was left on that I mentioned at the top. It is so painful to be trapped in a cycle of this type of thought disorder because there is a lack of control. OCD can compromise every single area of a person’s life.

I had a client years ago when I was living and working in NYC who had a compulsion where every time he saw a yellow cab, he had to go back to his apartment. It was absolutely debilitating for him. He was particularly driven by fear that if he didn’t do what the compulsion was driving him to do and go back to his apartment something terrible would happen. This is one example of how an illogical compulsion can wield tremendous power over someone suffering from OCD.

While it can present in so many different ways, there are 5 general categories of OCD compulsions. They are:

…repeatedly checking locks, appliances, windows, doors, and switches and compulsively, obsessively worrying about things being off or secure. You might need constant reassurance from others in your life and ask things like, “Did you see me turn the thing off? Did you see me lock the door? Are you sure?”

Checking can also present as checking your own memory to make sure you recall events in the appropriate way. It’s like obsessively rethinking a past conversation and the more you think about it the more doubt sets in worsening how you feel about yourself.

2. Fear of Contamination (physical or mental)

…constant worry that we or someone we love will get sick or contaminated with something. Fear of public restrooms, door handles, hospitals, sex, or eating in public places. It can create hours of labor after one feels they might have been contaminated, from cleaning the body to their space and it is so exhausting.

I had a client who believed truly in his heart of hearts, that if droplets from an air conditioning unit fell on him he would be contaminated with hallucinogenic drugs. So he would run home, feeling panicked, and take a hot shower to wash off the “contaminant”. It was so painful and again, so disruptive to his life.

3. Need for Order and/or Symmetry

…extreme concern with things being just so and precise. While some of us are neat and crave order, what sets this diagnosable symptom apart is how much distress and discomfort lack of order causes and how much they need to control it disrupts the person’s life.

…recurring thoughts, images, sounds, words, or numbers that cause anxiety, worry, or disgust and cannot be resolved by logic or reasoning.

…ritualized hand washing, sanitizing, showering, and cleaning. It can also present as obsessive counting, or not being able to go about one’s day unless a particular routine is performed a certain number of times in exactly the same way.

There is treatment and therapy to help individuals suffering from OCD get relief. Involving a licensed therapist who specializes in obsessive-compulsive disorders is, in my experience, the most helpful and effective way to heal.

If this resonates with you or someone you know, you might be curious about whether you just like things being a particular way or if it’s something more. Inside this week’s guide, I’m giving you some questions to help you get more clarity and you can download that here now.

I hope this added value and that it helps raise awareness about the very real pain living with obsessive-compulsive disorder can cause. If you think this could help someone else in your world, please share it with them.

I hope you have an amazing week, and as always, take care of you.