You are here: Home / Podcast / 56 Mark Osborne – Recreating The Little Prince on Film

What was your favorite book as a child? Is it a story that still resonates with you as an adult?

There are some tales that are so magical to us in our early years, they still spark that same wonder and curiosity within us even as adults. One beloved international story, that has touched the hearts and souls of so many around the world, and has recently been adapted into an animated feature film, is The Little Prince. This iconic children’s novella by Antoine de Saint-Exupery, was originally written in French (Le Petit Prince) in 1943. The Little Prince is the fourth most translated book in the world and was voted the best book of the 20th century in France. It has been translated into over 250 languages (and dialects), including braille. Selling nearly 2 million copies annually, with sales totally over 140 million copies worldwide, it has become one of the the best selling books ever published!

Today we’re talking to the director of this beautiful new animated feature film, Mark Osborne. I was curious to know what would compel a successful director to take on a story that is revered and beloved by so many? When people have a deeply emotional connection to a story, there are so many ways for an adaptation to go wrong. Mark is such a nice guy and has been a successful artist, animator, and director for over two decades with 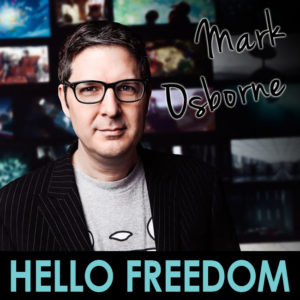 films like Kung Fu Panda and The SpongeBob SquarePants Movie among many others. Why take that risk, I wondered.

I knew there had to be a personal connection to the story…and I was right! So tune in to this very special episode of Hello Freedom to get the scoop on how Mark put his own spin on this classic tale by employing both computer generated imagery (CGI) and stop-motion animation along with hiring an all star cast to voice the characters including Jeff Bridges, Rachel McAdams, Marion Cotillard, Paul Rudd, James Franco, Ricky Gervais and Paul Giamatti among others. With two years of pre-production and two entirely separate crews on different continents, Mark lived The Little Prince for many years before the production even started (and has stories to tell)!

It is not surprising that the film had been winning awards all over the world for the past ten months and although Paramount chose not to release it in the US (for reasons that remain a mystery), fear not, Netflix has picked it up so you will finally be able to see this beautiful and touching film from the comfort of your own couch on August 5th, 2016!

For the sake a full disclosure (and an opportunity to Mom-brag for a sec) I should mention that our son Alex Juhasz was the stop-motion production designer and character designer as well as head of the puppet department for the stop-motion portion of The Little Prince. I think you will love the magical experience of this film as much as I did, and the beautiful, funny and insightful stories Mark shares with us in this episode!

“I remember fondly being a carefree child and drawing whatever I wanted… And I think back to that time a lot when I try to tap into that more innocent artist that I once was.” –  Mark Osborne

“When I discovered animation that kind of combined all the different things that I was interested in and curious about.” – Mark Osborne

“You want to uncover something unexpected, and that’s what I love about the creative process.” – Mark Osborne

“I think you can only do your best work when you give yourself the luxury and the freedom to fail.” – Mark Osborne

55 Emily Nolan – Celebrating Your Healthy Body
Next Post: 57 Misha Lambert – Being Your Own Hero of Pretty