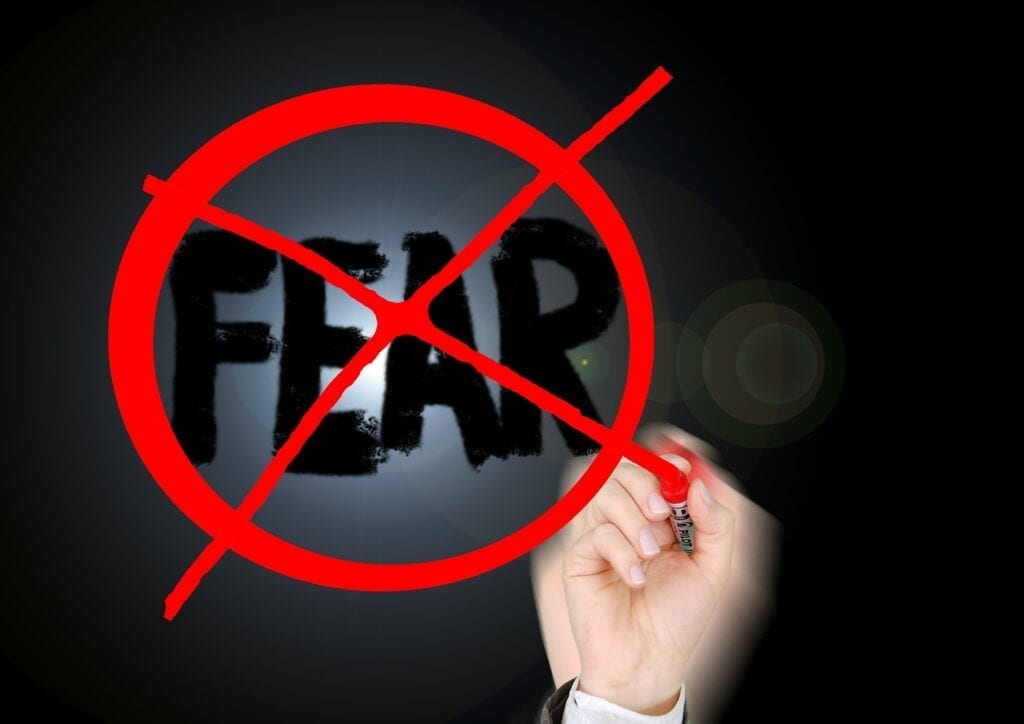 Last weekend, I had the privilege of delivering my first ever keynote speech for the Hay House I Can Do It—IGNITE! conference. I was excited and nervous but ready.

As a therapist, I share stories, sometimes my own, if I believe it will help a client or illustrate a point. But standing in front of 2,500 people and being live streamed around the world to many many more people while sharing my actual life story was a totally new experience and made me feel vulnerable in a way that surprised me.

So many people came up to me after my talk to say they felt like I was talking directly to them and/or about them. It reinforced how much more alike than different we humans are.

Fear is a universal experience. If you’re human, you need to figure out how to use fear, or it will definitely use you and keep your dreams small, which is what my story is about: how and why I became an expert on fear and the mind/body connection.

So here it is…

In 1997, I received my Master’s in Clinical Social Work from New York University and became a therapist.

Less than a year later, I got my Ph.D. in Fear.

After a decade as a talent agent, predominantly for well-known actors and models, I was desperate to get off the crazy nicotine, caffeine, adrenalin-fueled hamster wheel that had become my life. I was burned out and realized it was time for a career change when I cared more about getting models into rehab, therapy, and eating disorder clinics than a lucrative Pantene contract.

When I landed in the modeling-agent world, I was convinced I would change an exploitative system. I did not, but the system definitely changed me.

Immediately following graduation, the single most important life-changing event happened. I met the man who would become my husband, Victor Juhasz. Vic was a widower with three out-of-control teenage boys. As if being the widowed father of three sons wasn’t enough, he also lived in New Jersey (I lived in New York City).

I didn’t care. It was perfect. He was perfect. Intoxicated with love hormones, I thought this talented, successful, gorgeous man could have twenty-two teenagers, and I would still say, “It’s all good. Love will find a way!” Believe it or not, this was the calm before the storm.

Four months into our relationship, my father, sixty-one years old and in prime health, dropped dead of a heart attack.

Three months after my father’s death, I discovered a plum-size lump at the base of my throat, which was diagnosed as a large, malignant thyroid tumor. My heart ached as I underwent surgery and radiation while building a relationship with the three boys, whose own mother died of cervical cancer when they were five, three, and one. I couldn’t bear the thought of these boys seeing yet another female love them and then be taken from them.

A mere five months later, a more aggressive cancer was discovered on the other side of my thyroid. More surgery, radiation, and isolation followed.

I wasn’t two months in remission from the second cancer treatment when, on a quiet evening, I leisurely walked onto the back porch to find a huge stocking-faced man holding a large gun to the back of my husband’s head. We were robbed at gunpoint with one of the boys in the house.

My Ph.D. in FEAR was officially complete. For the first time in my life, I was afraid all the time.

The therapist in me knew this was a trauma response; the human in me was incensed. I made a conscious decision to become a fear expert knowing that I, or anyone else for that matter, could not really live life if fear continued to dominate my mind and decisions. I worked though my own fear with the help of my therapist and spent the next fifteen years in my busy private therapy practice researching the effects of fear and the mind-body connection.

I turned my pain into purpose and taught thousands of clients and students to transform their own fear into freedom.

Here are six truths I have learned about transforming fear.

1. Fear Is a Feeling, Not a Fact
This is great news and comes as a surprise to most clients. We change our feelings all the time, so we can change the fear feeling also! Mortal fear is the only informed fear. If your life is in danger, the fight or flight response is adaptive and necessary. However, most of the time when your flight or fight response is activated, you are not in mortal danger (we often refer to this as stress). You can have an initial fear response, recognize you are not in mortal danger, and calm your mind to create clarity.

2. Your Mafia Mind Is a Bully
Your fear mind, or “Mafia Mind” as I call it, operates just like the real mafia. Instead of extorting money, your Mafia Mind extorts joy and potential happiness from your life by threatening you with what might happen. A lot of things might or might not happen, so harness the power of your intention to create what you want to happen.

3. Be Here Now
Present moment awareness is essential to stop fearful thoughts from becoming reality and dictating decisions. Never mind what was and don’t be a fortuneteller. This present moment is unique—there has never been and will never be another. So let go of the “well this is what will happen because that’s what always happens.”

4. Meditation
A dedicated daily practice of stillness and silence strengthens your “be here now” muscle. Living more in this present moment will decrease fear-generated “future tripping” into what hasn’t happened and “past tripping” into what no longer exists.

5. Exercise Gratitude in Motion
An intriguing study from the Corporation for National and Community Service titled The Health Benefits of Volunteering indicated volunteering as little as two hours per week increased feelings of happiness and decreased feelings of depression in volunteers. I made volunteering a mandatory experiment for clients struggling with fear and anxiety and found positive results. Fearful obsessing is very isolating. Sharing your gifts with others is the fastest way to get out of your head and into living.

6. Nourish Your Noggin
Seek help from a licensed professional. Years of my own psychotherapy before and after my year of fear created a safe space for my healing.

You have the power to free yourself from the mental prison that fear creates. Anything worth having is worth working for, and you deserve to live fearless and free.

What are your fears, and how can you implement the above six strategies to use your fears to inform rather than dictate your decisions? What truths, in addition to the six I shared, have you revealed about your fear? I am always interested in your thoughts, so please share. I am available to guide you and cheer you on, along with our supportive community.

Here’s to living Fearless and Free!