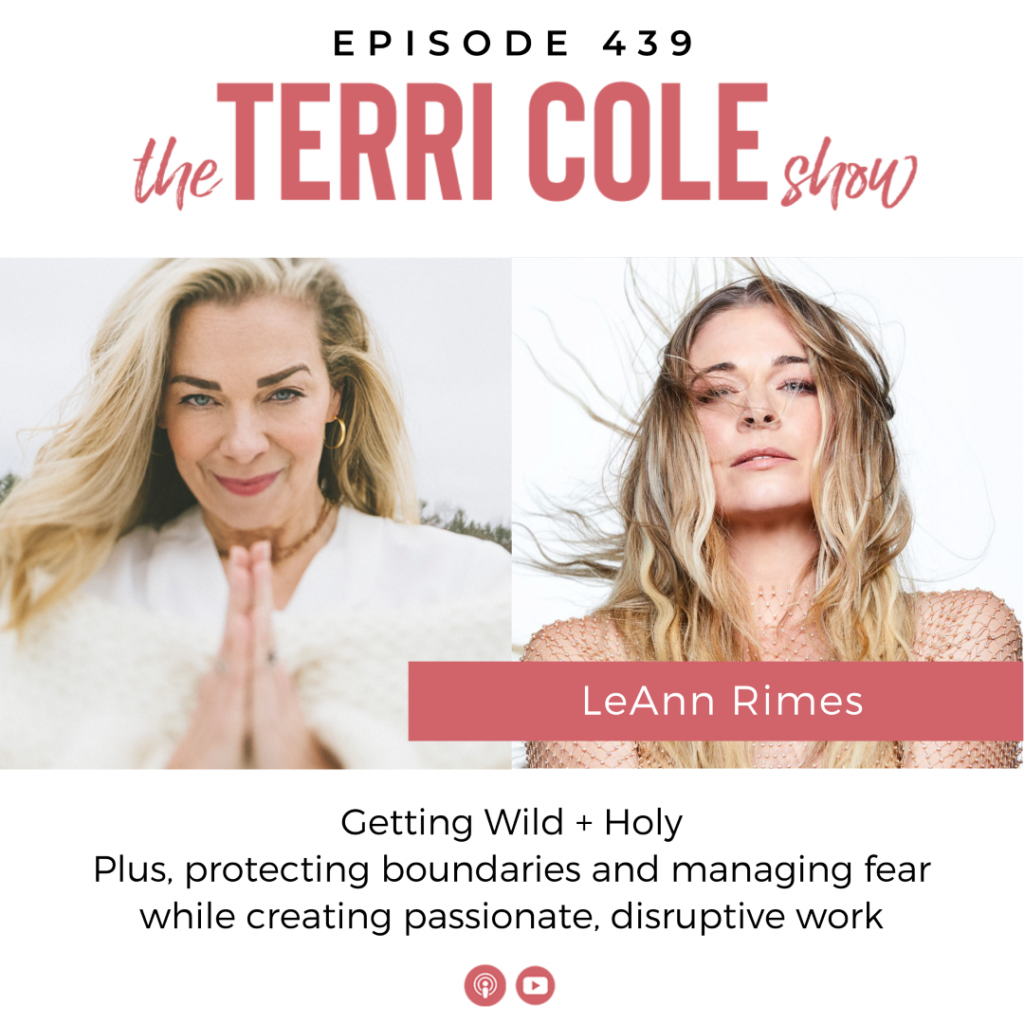 439 Getting Wild + Holy with LeAnn Rimes

“Each one of us has something unique to bring into the world, and if we don’t bring it through, it’s lost.” – LeAnn Rimes

I have an especially exciting girlfriend jam to share today with my pal LeAnn Rimes! She’s an incredibly talented artist as well as an amazing person. She first became known for her country hits, and she could have rested on her laurels, but she has never stopped challenging herself in her creative work and personal development. We chat about managing the anxiety that comes with creating passionate, disruptive work. Plus, she shares the story behind her new record, “God’s Work,” and the single “The Wild.”

Out of the 42 singles she has released throughout her expansive career, LeAnn’s ballad “How Do I Live” holds the record as Billboard’s Hot 100 all-time #1 hit by a female artist and continues to rank #4 on Billboard’s “Greatest of All Time: Hot 100 Song.” 15 of her multi-genre singles are top-10 hits, including “Can’t Fight the Moonlight,” which went #1 in 11 countries.

In 2017, the world-renowned singer released her 16th studio RCA UK/Thirty Tigers album, Remnants, which debuted at # 4 on Billboard’s Independent Album Chart, peaked at #3 on iTunes ® overall charts in its first week, garnered two #1 Billboard Dance hits with “Long Live Love” and “LovE is LovE is LovE,” and one Top 5 hit with “Love Line.” In the fall of 2018, Rimes revealed a new EP for her fans titled Re-Imagined that featured five new versions of some of her record-breaking hits, including an epic duet with the music icon Stevie Nicks. Most recently, the Grammy-winning superstar unveiled her first-ever LIVE recording as an exclusive vinyl release in honor of the 2019 Record Store Day titled “Rimes: Live at Gruene Hall” where Rimes celebrated music of all genres.

The powerhouse vocalist lit up television screens throughout the 2018 holiday season as she starred and served as an Executive Producer in Hallmark’s “It’s Christmas, Eve,” which earned the highest TV original movie debut to-date for the channel premiering to over 4.3 million viewers. In 2020, Rimes shined the brightest and won season four of FOX’s The Masked Singer, with Entertainment Weekly stating that she delivered “… the most beautiful performance in the history of The Masked Singer.” Most recently, she served as the inspiration judge on the discovery+ competition series, Meet Your Makers Showdown, which started streaming November 2021 and in April of 2022, she headlined an episode of the iconic music series CMT Crossroads alongside Mickey Guyton, Carly Pearce, Ashley McBryde, and Brandy Clark, who helped commemorate Rimes’ career and recognize the path she blazed forward for women in all genres.

Passionate about using her voice to help heal the world, LeAnn was honored with the Ally of Equality Award by the Human Rights Campaign for her over 20 years of support of equal rights, the 2019 HOPE Award for Depression Advocacy, and 2009 ACM Humanitarian Award, among other recognitions. She continues to channel her voice in new ways, releasing CHANT: The Human & The Holy (EverLe Records / Thirty Tigers), which spent 5 weeks at #1 on iTunes New Age Chart, as well as her iHeartRadio mental health and wholeness podcast, Wholly Human, that brings her lifestyle blog, Soul of EverLe, to life. Now in its third season, Wholly Human previously reached #2 on iTunes Health & Fitness Chart, placed in the Top 35 overall for podcasts worldwide and was recently named as one of the 15 best mental health podcasts that educate and empower listeners by Good Housekeeping. LeAnn is now celebrating her 25th anniversary as a recording artist, commemorating the release of her debut album “Blue,” and will release her next studio album, god’s work, on September 16th.

You can find LeAnn on her podcast, Wholly Human with LeAnn Rimes, and order her new album god’s work wherever music is sold! 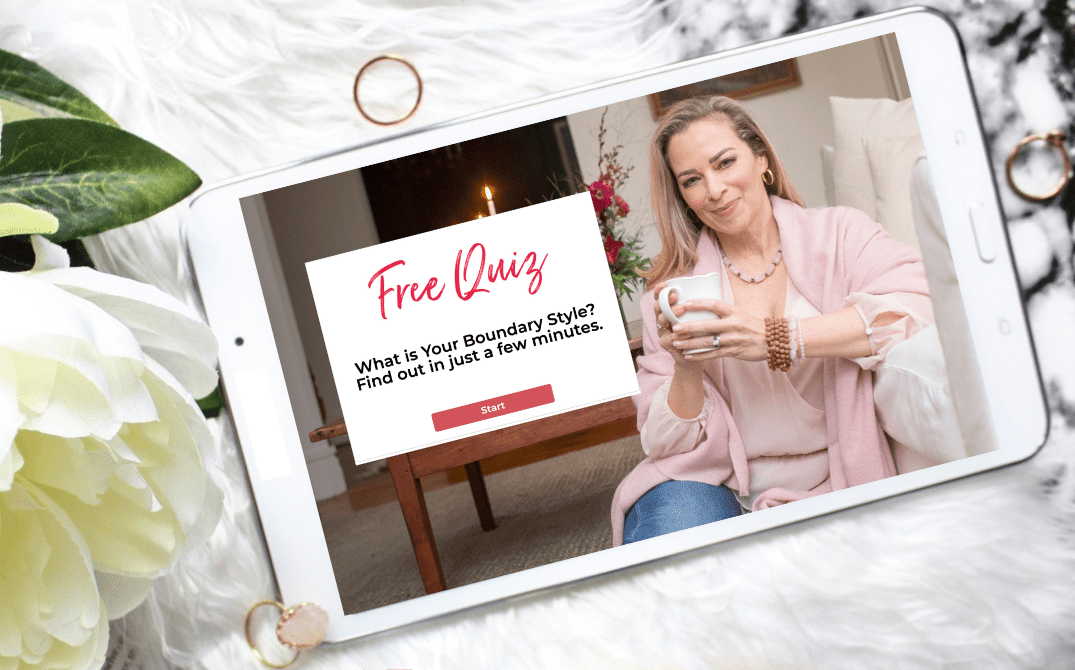 Here are some ways we can connect and grow together:

I WROTE A BOOK ABOUT BOUNDARIES! Boundary Boss is THE essential guidebook for authentically expressing your desires, setting healthy limits and bringing more satisfaction, joy and peace into all of your personal and professional relationships. There are super JUICY bonuses when you pre-order, so what are you waiting for?

TAKE THE BOUNDARY STYLE QUIZ I always say, ya can’t change anything until you become aware of it, so take the quiz and discover your unique boundary style!

FOLLOW ME ON SOCIAL Instagram is my jam and one of my favorite ways to connect with you. I put out new content there every, single day ?

JOIN OUR FREE FACEBOOK GROUP Become a part of our powerful community of real love revolutionaries!

SIGN UP FOR THE NEWSLETTER Want love notes from me delivered straight to your inbox? I share things to inspire and empower you each week, plus what I’m reading, watching, cooking…you get the idea ?