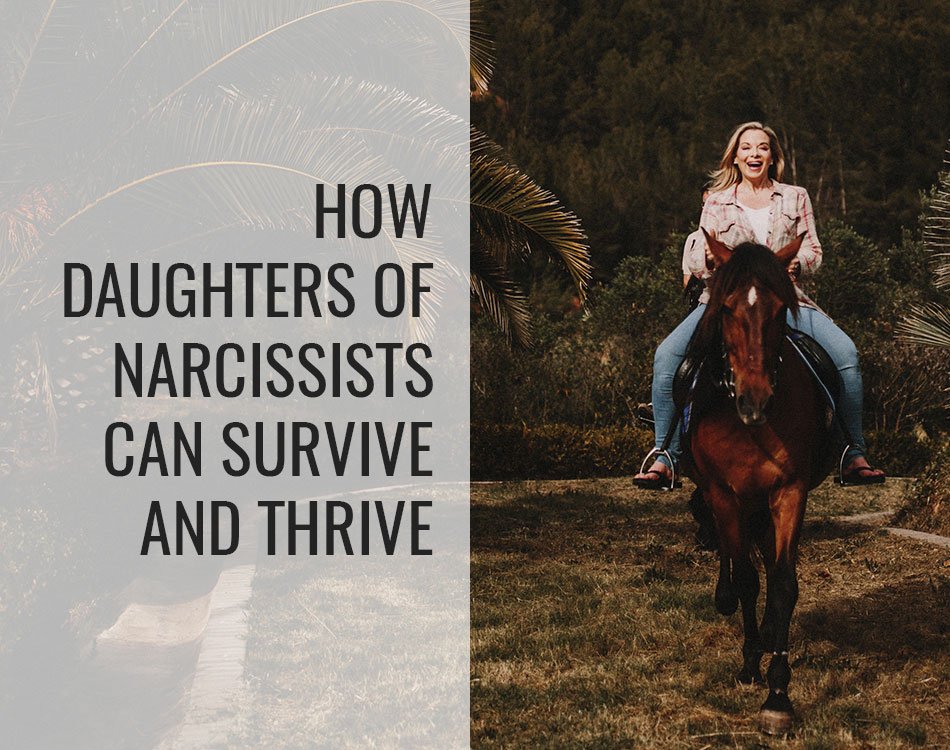 How Daughters of Narcissists Can Survive and Thrive

Her hysterical sobbing made it difficult for me to make out what she was saying. Finally, she said, ”My mother just informed me that she is wearing a white dress to my wedding. She has already purchased it and when I asked her to at least add a navy sash and jacket, she refused and told me how ashamed she was of me for being such an ungrateful and selfish daughter.”

Above is an actual story of a former client who is the daughter of a narcissistic mother.

Does your mother guilt trip you or emotionally blackmail you? Does she act competitively with you or take credit for your talent or accomplishments?

These are all behavioral patterns of the narcissistic mother.

I promise you, if you have one, you know it, even if you haven’t had the correct language to describe it. It is an incredibly painful experience to be the child of a mother with this personality disorder, and particularly painful for daughters.

In this week’s Real Love Revolution video, I will be tackling the topic of how to survive and thrive from this experience. I’ll be covering:

There are two different types of narcissistic mothers.

The engulfing narcissist who sees their daughter as an extension of themselves. This mother takes credit for any achievements or talents the child displays as her own.

The second type is the ignoring narcissist. She has little interest in her daughter’s life and takes minimal care of her while growing up. This mother continues to focus most of her energy and attention on herself.

This experience can be counterintuitive because in American culture, mothers are idolized as all nurturing, forgiving, self-sacrificing angels.

Therefore, speaking ill of your mother is considered almost sacrilegious and carries shame. The insidious emotional abuse in this experience can be devastating and isolating because it leaves no physical evidence but the destruction of a child’s sense of self and safety in the world is undeniable.

If you have experienced the very conditional love of a narcissistic mother, it is time to focus on how you can move from surviving to thriving. The first step is to draw solid boundaries to limit contact, which will help to prevent further damage. Another step toward healing is to find support, whether through a group or in individual therapy, or both. This type of abuse is very specific, and learning more about narcissistic mothers while connecting with other women who have gone through the same experience can accelerate your healing. To learn more about the two types of narcissistic mothers, the behaviors they display, and how to survive it, download the Daughters of Narcissistic Mothers Survival Guide now!

It is possible for you to heal from this experience. You deserve to be seen and loved for who you are.

Drop me a comment here on the blog and let me know what resonated with you after watching.

And ladies, if you haven’t yet joined the Real Love Revolution waiting list to gain immediate access to our private FB group and receive a bundle of FREE gifts from me please click here to join us!

Thanks for watching, reading, and sharing!
And as always, take care of YOU.